The “tear drop” muscle in the inside of the thigh is a thing of beauty to behold. When it’s flexed, just the shape itself is beautiful and when it’s well developed it adds an element to the legs that’s plain fascinating.

I catch myself saying. Why did the Lord make this muscle so pretty. He could have made it all kinds of different shapes but he chose to make it the way He did. Fascinating!

When I first moved out to California from Idaho I got a job in a Bicycle shop repairing bicycles. I knew next to nothing about bikes and I knew even less about guys that raced on bikes but Bert Straub the owner of the shop knew the whole story. In fact, he used to have Olympic contenders come in all the time just to chat and catch up on the latest news.

There was one Olympic sprinter in particular by the name of Wes Chowen that had legs that wouldn’t quit. His upper body was almost non-existent but his drivers were incredible. It was all that quick sprinting that did it. None of those long distance stringy looking thighs but … jammed full, gorged with blood thighs and … his quads were the king of the hill.

He used to walk in … casually pushing his bike across the floor wearing a little pair of shorts, which revealed thighs that were close to obscene.
I gotta admit, I was hitting it heavy at Vince’s at the time and there was nobody in the place with quads like Wes had.They hung over his knees and you know … the funny thing was … he seemed oblivious as to how great his thighs were. I made such a big deal out of them he felt self-conscious.

I couldn’t help it.

His thighs were incredible and especially his tear drop. When he was relaxed it almost hung down over his knee.

Speaking of building quads and especially that wonderful teardrop here’s a great system to lend extra beauty to yours.

But for some reason the leg extensions machine never seems to build any size in the quads. The king of all quad builders is the hack machine especially close stance hack machine. It’s a killer.

Here’s a quad building secret you’ve never heard of I’ll bet. It’s called a Swing Squat Machine. It’s wonderful because the lower you go the easier it is. Different huh? 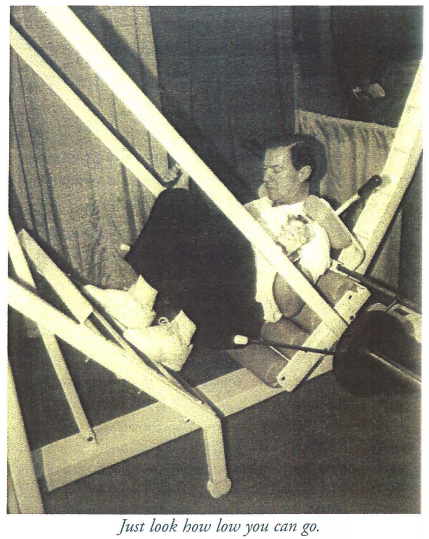 Normally, when you use a hack machine, the lower you go, the harder it is. Not with the swing squat. It’s designed to let you go all the way down to the bottom without wiping out your knees.

It’s great for taking all the strain off the back and especially for the vastus internus.

What Is The BEST Training Schedule?

What Are The Best Exercises For Each Body Part?