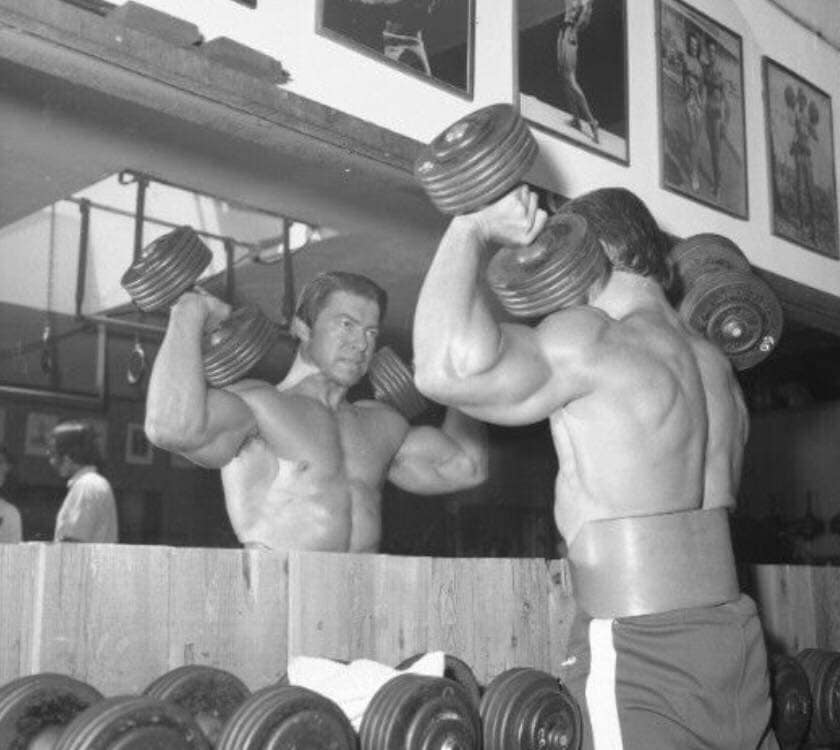 I don’t believe any body part can grab your attention like thick, wide shoulders. Whether you’re in a pair of trunks, a tank top, long sleeved shirt or even in a jacket, they stand out and demand attention. There’s just something about thick, full delts that exude power. You may not have naturally wide shoulders but I can assure you once you learn these simple techniques you can build impressive deltoids.

I always had a narrow frame so I had to find a method that could pack serious meat on my deltoids. The methods printed in the magazines just didn’t do much for me. So with Vince Gironda’s help I formulated this system.

I learned how to stack so much meat on my shoulders, it was difficult to detect the narrowness of my bone structure. If you’re like I was, you might take comfort in the fact that … in a way, being smaller is a blessing because once you get as wide as the other guys you’ll have extra meat which makes you look so much more massive.

When I first started training, my friends used to say. “Larry you’ll never win Mr. America. Your shoulders are too small.” I used to grit my teeth and vow that I was going to get so big and thick that no one would ever say that to me again.

Years later I walked on stage to compete for the first Mr. Olympia title. As I twisted into a pose that highlighted my arms and deltoids the audience went crazy … it turned out to be their favorite shot.

Reg Park, 7 times Mr. Universe was heard to say. “It’s Larry’s arms and deltoids that make him unforgettable.” Can you imagine my satisfaction after starting with such narrow shoulders.

I Had To Get Injured To Learn

It was an injury that helped me discover the method that changed my greatest weakness into my best body part.

If I remember right, my right shoulder had a little twinge in it. Not really wiped out but just didn’t feel quite right. You know the way it is. You want to work out but you’re a little hesitant to hit it heavy?

This day, I was going to use lighter weight and concentrate on “form”. I felt if I could just get some kind of delt movement it would flush out those little shots of pain. It was then I discovered …

An Exercise That Builds All Three Deltoids Heads At Once

I was trying to find the exact movement that truly worked only deltoids not triceps, not upper pecs but just pure deltoids. I closed my eyes and listened to my body carefully. I could feel the delts saying … No, not right there … move the elbows back further … bring the dumbbells down wider … now don’t forget the arc.

Actually, it’s more of a feeling than it is a voice. You can hear it unless you’re too caught up in the “go heavier” voice.

My delts were loving it. I could feel my “endorphin high” beginning to build. The more sets I did the more I learned.

I had been so wrapped up trying to use heavy weights I had completely overlooked this breakthrough. It took an injury to get me on track.

“Right here at the top, press those elbows back as hard as you can”.

The exact motion is critical. It goes something like this …

As you press the dumbbell over head, the frontal deltoid head does most of the work then right as you reach the top of the arc, you press back as hard as you press up. The rear deltoids are the only muscle that can pull the elbows back. Then as you come down, stick those elbows and weights out as far as possible. If you keep the little fingers high, the stress goes right on the outside deltoid head and when you’re done you will have worked all three deltoid heads with just one exercise.

Equipment Needed To Make This Work

The dumbbell rack needs to be just high enough so when leaning off balance into it … it hits you a little below the hips.

Grab a pair of dumbbells. Start with a light weight at the beginning so you can get the correct movement. You should be facing a mirror as well. Hold the dumbbells with the little finger higher than the thumb. Keep the dumbbells in this position throughout the movement.

Press the dumbbells overhead … not quite to lock out position but, just through a range of movement that is only the middle 3/5s of the exercise.

It’s the arc of the elbows the shoulders sense. Press the elbows so that, if possible, they would touch up somewhere behind the back of your head. Also, the dumbbells start out with the palms facing the mirror … not facing each other. You’ll be tempted to start out having the palms facing each other but … don’t do it … because if you do, it’s harder to get the negative portion of the exercise correct.

Okay, let me repeat … press the elbows up and behind as high as you can … trying to keep the arc that has the elbows touching together behind the head. Neither the dumbbells nor the elbows go very high.

What Is The BEST Training Schedule?

What Are The Best Exercises For Each Body Part?